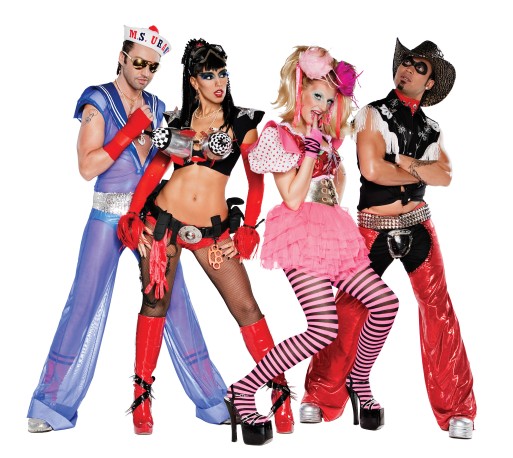 How would your inner ’90s child feel if I told you the Vengabus is coming – for real? That’s what we’re in for this November 3 when the Vengaboys crashland in Hobart for the very first time. And we guarantee you’ll get to party like it’s 1999.

As a Hobart child growing up in the ‘90s, “going to Ibiza” meant going to my best friend’s house and pulling apart the furniture to build an epic fort. While pumping the Vengaboys on full blast, of course.

Some of us have grown up in the decade or two since; some of us haven’t. It’s likely Vengaboys vocalist Donny Latupeirissa belongs to the latter group.

“It’s so amazing to be all the way on the other end of the world, and still feel that people love what you’re doing,” he grins.

Donny joined the Vengaboys in 2006, though the band has hardly progressed from its original fluoro-coloured, platform-heeled, cowboy-hat-wearing ‘90s heyday. And that’s just the way we like it.

“We stay true to the concept of what the Vengaboys was: really uplifting, maybe a bit naughty. Not too serious, but we take ourselves seriously. The whole feeling is party and feel-good.”

It does seem that, surrounded by a mix of pumping pop bands from the Spice Girls to Smash Mouth, the ‘90s was a joyous era in which countless (and now, delightfully dated) hits were produced.

“It’s also the era I grew up in, with Aqua and the same kind of genres and bands,” Donny reflects. “Now we’re getting older, we’re reminiscing back to the good old times when we were younger and exploring the world. Everybody has their own experience with that time. I think everyone has that experience with feel-good moments.”

So why were the ‘90s filled with such innocent fun – and what burst the bubble, anyway? According to Donny, modern music has a tense undertone but it’s just a matter of trend.

“It’s all about DJs, now. Everybody goes to clubs. It’s a change in music style. I don’t know how it happened – it just got more popular.”

Donny is in denial, and blatantly admits his life with the Vengaboys is pretty much one big fun-fest.

“I really feel blessed that I can do this as my job – that I can get paid to party.

“Sometimes when you’re feeling miserable on the inside, you just have to get your groove on and do what you have to do. Then you feel much better afterwards.”

Simple as that, really. And his own go-to happy tune?

“The Vengabus, because it’s really uplifting and reminds you that you have to party. You have to have fun. If you’re feeling miserable, it’ll go away and life is fun.”

It’s a way of life for Donny both on-stage and off. With his bandmates, you’ll find him going to the movies, eating sushi, and chatting on the phone like “really good friends – like brothers and sisters”.

“As long as we can do performances all around the world, then we’re actually quite happy.” A born performer, Donny has a background in dancing and couldn’t feel more at home in the spotlight.

“It’s like a dream come true to travel the world and be able to experience so many places and meet so many interesting people,” he says.

“As somebody who studied dance, it’s really great to find a steady job in performing and entertainment.”

For those of us enjoying the Vengaboys’ iconic hits, it certainly seems that it would be more than just a steady job for the musos. Though he refers to his role as “work”, Donny assures us it’s his “passion, and it’s also a way of living”.

“This is not for everybody, mainly in terms of having to travel a lot, and live from a suitcase and do interviews and everything. Sometimes it can be very hectic and crazy, and that’s part of the job as well.

“I like to take long walks with my dog in the park, in nature, because that’s really nice to clear the head and get some peace and quiet away from the hysterical stage life.

“Next to that, I go to the gym and spend time with friends. Really regular stuff.”

Except when the warmer months come around, of course. Then he goes to Ibiza. Every summer. What else could we expect?

“It’s a party island. Everybody who is going to Ibiza is playing our song. So when we are there on Ibiza, doing that song, the crowd is saying: ‘Yeah, we’re here! Yay!’. The crowd has lots of fun.”

And how about when the Vengaboys fly to our own little island this November?

“It’s going to be a very audience-participation, happy, high-energy concert. We’re looking forward to coming to Tasmania and we’re really excited to see the beautiful city of Hobart.”

See the Vengaboys hit up the Wrest Point Casino with their chart hits We’re Going to Ibiza; We Like to Party (The Vengabus); Boom, Boom, Boom, Boom!; and more at 7.30pm November 3. The band will be supported by Tina Cousins, Crystal Waters, DJ Sammy, Whigfield, Sonique, and Joanne.